Marin Minamiya: The Japanese climber who scaled Everest at 19 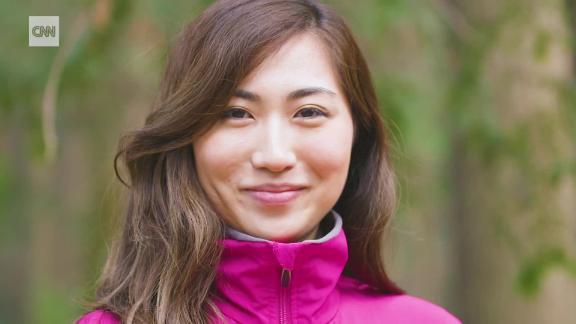 At 19, Marin Minamiya made history as the youngest Japanese person to climb Everest -- since then, she's taken on some of the highest peaks in the world.

It was a dream that manifested for Marin Minamiya the first time she laid eyes on Mount Everest about six years ago.

Minamiya was 13 and visiting Nepal on a school trip from Hong Kong.

"I was trekking to the base camp of Annapurna and when I saw Mount Everest, it made me wonder what it would be like to climb this mountain? Who would I meet? What will I learn?" she said.

When Minamiya returned home she could not stop thinking about one day conquering the tallest peak in the world.

"If a small peak in Hong Kong would teach me so much about myself, then what can Everest teach me? I wanted to climb that peak ever since," she said.

Minamiya, who was born in Japan's Kanagawa prefecture, south of Tokyo, said her family were supportive.

"I told my dad, 'I want to climb Mount Everest'. And he said, 'All right, great! I support your dream, but I'm not going to support you financially.'"

Securing enough funds proved to be the biggest challenge for Minamiya -- who struggled to find the right pitch to secure sponsorships, until she realized she could make history.

"When I was 17 years old, "I realized if I climbed Mount Everest by the age of 19, I would be the youngest person in Japan. So that's why I set that goal and decided to embark on my climbing journey."

That journey to the summit of Mount Everest -- from that first sighting at age 13 -- took six years of planning and training.

"I didn't have the skills to climb 8,000 meter peaks ... I did some research online and I came up with my own training program, which was to carry about 30 kilos of weight on my back and walk on the treadmill at the highest incline for more than three hours," she says.

"But of course, the best training was to continue climbing mountains."

Her dream was finally realized on May 2016, when, at age 19, Minamiya became the youngest Japanese person to summit Everest.

"When I reached the summit, it was ... I cannot put it in words. I was just crying and I had icicles like on my lashes. It was absolutely beautiful," she says. "I thought that I had become somebody completely new. I was reborn again."

Minamiya's journey to Everest took her to some of the biggest mountain ranges in the world.

As well as having the world's tallest mountain tucked under her belt, Minamiya completed the Seven Summits -- a challenge that took her to the highest peaks of all seven continents.

In 2017, at the age of 20, she became the youngest person in the world to complete the Explorers Grand Slam -- reaching the world's seven highest summits plus the North Pole and South Pole.

"I was just thinking about, 'Okay well, what should I do next?' I call it the domino effect of dreams coming true," she says.

Along the way she became a brand ambassador for the Japanese retail company, Uniqlo.

Despite her accolades, Minamiya does not want to be called an explorer or adventurer. Currently a university student studying political science and economics in Japan, she says she has other life challenges to conquer.

"I still have to finish my studies and currently, I am sailing quite often. I get asked a lot, 'Why are you climbing mountains if your name is Marin? You should be doing marine sports'," she says. "And now I'm sailing and hopefully one day in the future, I can sail around the world. That's definitely one of the things that I would like to do."

Minamiya says she wants to encourage other people, especially young women, to chase their dreams, just as she has.

"Believe in your potential, and believe it's infinite," she says. "Don't be afraid to be the only girl in certain situations. You'll definitely learn to manage. Go for it - you should definitely follow your heart."