BTS! We haven't seen boy-band fandom like this since the Beatles 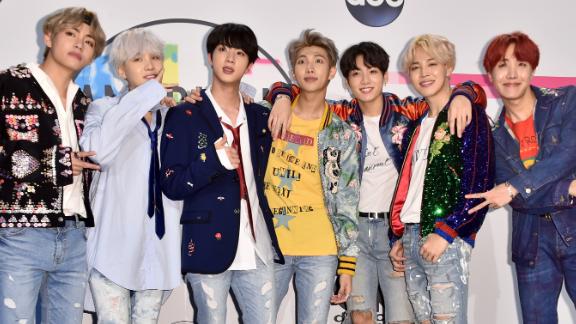 Big-name K-Pop groups like BTS and EXO are building a fortune off their success and becoming a worldwide phenomenon.

If you haven't heard of BTS yet, it's time to succumb to the inevitable: The Korean boy band is taking over the world.

Their new album, "Map of the Soul: Persona," out today, is expected to demolish international sales charts. They're about to drop a new single featuring American pop star Halsey. And they'll bring down the walls of studio 8H this weekend when they appear on "Saturday Night Live."

This is One Direction big. This is Beatlemania big. And while K-pop music isn't exactly a new sensation outside of Korea, BTS and similar groups are cultivating devoted followings across the globe, elevating K-pop from a niche import to a full-blown international movement.

So before our new K-pop overlords become any more powerful, it's time to get to know them. Here are 12 essential facts about BTS and the colossal, churning K-pop industry that spawned them.

1. BTS officially stands for 'Beyond the Scene.' But that's not what people typically call them

When BTS was first fully formed in 2013, they took their name from the Korean expression Bangtan Sonyeondan, which roughly translates to "bulletproof boy scouts." In 2017, as their profile rose among English-speaking audiences, the group announced they were shifting the meaning of the acronym to "Beyond the Scene" in a nod to the themes of empowerment and individuality in their music.

It depends where in the world you are, but most likely, you'll hear people refer to the group as BTS, the Bangtan Boys, or for Japanese audiences, Bodan Shonen Dan.

2. The seven members each have stage names

It's not uncommon for K-pop groups to have more members than a starting hockey lineup, and BTS has a grand total of seven:

Here they are, in pastel glory, at the Seoul Music Awards in January:

3. K-pop stars are called 'idols' because of the intense fandoms they inspire

It may seem like hyperbole, but the term "idol" is pretty accurate when it comes to the passion and devotion K-pop artists command, and you'll often hear the term thrown around for a group as a whole and its individual members. It's long been a convention of boy band fanatics to have a favorite member, and in K-pop circles, fans call their favorite member their "bias."

4. BTS fans call themselves ARMY, and like all boy-band devotees, are incredibly loyal

ARMY (not "the Army," educate yourself) is like any other massive fan group with a cool name, but with everything dialed up to 11. Since BTS has international and cross-lingual appeal, being a part of ARMY is as much about interacting with and supporting other fans as it is about supporting the group. ARMY members from across the world will gather online at all hours to watch and enjoy a BTS appearance in a different time zone, or translate different BTS news and interviews so more fans can enjoy it. Memes, handmade products, fan art and fan fiction also connect ARMY members across the globe.

Unfortunately, the sheer size of ARMY also means there's a high potential for toxic drama, unhealthy obsessions and online abuse between members, as well as intense animosity toward anyone who dare speak ill of BTS. Of course, that kind of behavior is hardly endemic to BTS, K-pop or the music industry (hello, all sports ever). It just may be more noticeable with a fandom that's massive, non-centralized and highly social media-savvy.

5. BTS' success is comparable to other boy-band sensations

Again, BTS' success isn't new, but there's a difference between being a popular act and being a worldwide icon. In 2017, they beat out the likes of Justin Bieber and Selena Gomez to win the Billboad Music Award for Top Social Artists of the Year, and became the first Korean artists to take home a BBMA prize.

Their BBMAs appearance was a coming-out party of sorts, and since then, they've been everywhere; on "Ellen," on the "Late Late Show with James Corden," and on the cover of virtually every major entertainment magazine ever. They've also had two albums hit #1 on the Billboard 100 chart: "Love Yourself: Answer" and "Love Yourself: Tear," both in 2018.

It was the first time a group had two #1 albums in the same year since — you guessed it — One Direction in 2014. "Love Yourself: Her" also topped iTunes' top-selling album chart in 73 countries and territories after its release.

6. Social media is an essential part of their success

BTS also holds several Guinness World records, including the most Twitter engagements and the most music video views within a 24-hour period (records that had previously belonged to One Direction's Harry Styles and Taylor Swift, respectively).

That kind of achievement is indicative of just how important social media is in uniting BTS with their fans, and the fans with each other. Only one member of BTS — Kim Nam Joon — speaks English fluently, though several others are conversational, so social media is an ideal place to connect with fans. Not to mention, there's a rich and rather hilarious meme culture among ARMY members, who tend to be young women already fluent in the esoteric vernacular of the internet.

Every time one of the boys in BTS does something weird, adorable or relatable, it almost instantly becomes a reaction meme or an in-joke or some other little part of a vast and ever-expanding K-pop discourse that spans distance and language.

True to their adopted English acronym, "Beyond the Scene," BTS' focus on socially relevant topics like mental health and the nature of fame has boosted their influence outside of the music industry.

In September 2018, BTS became the first K-pop group to address the United Nations when they delivered a three-minute speech during the launch ceremony of UNICEF's global partnership Generation Unlimited. They talked about their 'Love Myself' campaign, which was launched in partnership with UNICEF and focuses on global education and the prevention of youth violence.

8. The K-pop industry is a highly regulated machine whose artists are hand-picked and trained for superstardom

All messages of authenticity aside, the reality is K-pop acts don't typically start out as a bunch of people futzing around with guitars in their parents' garage. The groups are usually specifically put together by large Korean entertainment companies, and hopeful members train for years to perfect their dancing and singing skills.

It's an extremely demanding, expensive and often alienating process, and auditions for groups are highly competitive. Once a hopeful becomes an idol, they are expected to maintain a squeaky-clean and non-controversial presence to minimize any risk to their carefully created images. So even though aspiring idols may end up with untold riches, fame and admiration, it all comes at a great risk and a steep price.

9. Aesthetics are a huge part of the K-pop game

In addition to being amazing dancers and capable singers, K-pop artists must also be ethereally, invariably attractive. After all, being an idol isn't just about being a skilled performer, it's also about being a easily marketable sex symbol. Perfect skin, slim bodies, stunning hair and a cutting edge fashion sense are absolutely critical to the idol formula.

It's not just about physical attractiveness, either. Every aspect of the K-pop genre, from pastel hairstyles to red carpet fashion to stunning music videos and album art, is presented with a rich and meticulously curated visual aesthetic. In a way, K-pop is as much art for the eyes as it is for the ears, and while this is a huge draw for fans, it can also be a discouraging reminder of the manufactured image the genre often favors.

10. One reason BTS is so popular is because their music focuses on themes of vulnerability and self love

There are plenty of uber-popular K-pop groups and artists who have courted international appeal in the last few years (BigBang and Psy come to mind). So why has BTS in particular seen such unprecedented success?

One popular theory is that their music tends to be particularly introspective, emotional, empowering and hyper-aware of the machinations of perfection and conformity that often drive the K-pop industry. Even their 2014 debut single, "No More Dream," was an anthem against conformity:

What is you that you dreamed of? Who do you see in your mirror, I gotta say: Go your own way.

One of their most recent singles, "Idol," celebrates individuality and confidence:

(As a testament to BTS' international success, a version of "Idol" also features a guest verse from rapper Nicki Minaj.)

Speaking of songs, you're probably not going to hear BTS actually sing their songs in English. K-pop songs tend to be mostly, if not exclusively, performed in Korean. You might hear an English word or phrase, and on occasion a rapped or spoken verse in English, but the built-in language barrier is a standard operating procedure for the genre. (There are notable exceptions, of course: BlackPink's massive new release, "Kill This Love," has entire verses and refrains in English.)

Still, the language difference makes K-pop's rise even more impressive: Most fans outside of Korea probably have only the barest grasp of the language, but will joyfully burst into broken sing-alongs whenever the latest BTS jam comes on.

12. The broader culture of K-pop is complex and sometimes toxic

While BTS' success has relied heavily on their messages of non-conformity and self esteem, their fame still exists within what some consider a problematic industry that purposefully limits the privacy and individuality of its stars. (After all, K-pop idols are usually not even allowed to date, lest they ruin the fantasy of attainability for their fans.)

It's also a widely held observation that K-pop's heavy reliance on perfection and precision reflect stringent expectations and social norms that are commonplace in Korean culture as a whole. In February, South Korea's Ministry of Gender Equality and Family released guidelines warning that the homogenous, highly-groomed K-pop "look" could cause some fans to develop skewed standards of beauty.

"Beauty standards of music shows is a serious problem," the guildelines said. "Most of them are idol band members but they don't represent various appearances (of society)."

The guidelines were pulled days later after a deafening outcry from K-pop fans, who likened the guidelines to censorship.

This complex stew of expectations can sometimes turn toxic, and the K-pop world is currently being rocked by an ongoing scandal surrounding some of its biggest stars. To make a long story short, some male K-pop idols have been implicated, and some even arrested, in connection to a digital sex scandal. Four K-pop idols have admitted to taking part in a group text where men shared illicitly filmed videos of women. Seungri, a member of the hugely popular group BigBang, is being investigated for his connection to a popular Korean nightclub where police say staff members supplied prostitutes to VIP visitors.

For some, the scandal — which doesn't involve BTS — reveals ugliness that can fester under K-pop's veneer of perfection, and speaks to a larger culture of toxic masculinity in Korea that is increasingly attracting criticism.

Could the scandal taint the gleaming worldwide rise of K-pop? Will BTS' commitment to empowerment and social responsibility inoculate them against such ignominy? No one knows, but what's certain is BTS' global success shows no signs of slowing down.