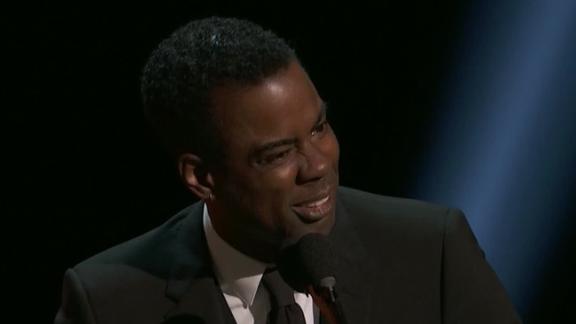 Comedian Chris Rock ripped into Jussie Smollett with a series of jokes Saturday at the NAACP Image Awards, where the actor was nominated for his role on the Fox series "Empire."

"They said no Jussie Smollett jokes," Rock said. "I know. What a waste of light skin, you know? You know what I could do with that light skin? That curly hair? My career would be outta here, (expletive) running Hollywood.

"What the hell was he thinking? From now on I ain't never gonna (say) no Jussie -- you're a Jessie from now on. You don't get the 'u' no more. That 'u' was respect. You don't get no respect from me."

Smollett, who had been accused by police of staging a fake hate-crime attack on himself, did not attend the awards show. He was nominated for outstanding supporting actor in a drama series for "Empire" -- a role that may be in jeopardy. Smollett has maintained his innocence and said he has been "truthful and consistent" since the saga began.

Rock's jokes left "The Daily Show" host Trevor Noah in stitches, but not everyone was so amused. Yara Shahidi, an actress on "Black-ish," accepted an award for the show and told the audience, "I stand with Jussie."

"Saturday Night Live" also took aim at the actor in a segment Saturday in which TV network executives fire Smollett after he twice tells outlandish stories of being attacked.

Prosecutors dropped 16 felony disorderly conduct charges against Smollett last week after the actor forfeited his bail money and did community service. The decision to drop charges has led to harsh criticism from the Chicago mayor, police and outside district attorneys.

Smollett, who is black and gay, told police that two men attacked him in Chicago on January 29 and yelled racist and homophobic slurs while striking him. Smollett said the assailants placed a noose around his neck and poured bleach on him, according to police.

Chicago police initially investigated the case as a possible hate crime, but they later said they believed the attack was staged by Smollett to bolster his profile and career.

Cook County State's Attorney Kim Foxx defended her office's decision to drop charges, saying that a guilty verdict likely would not have led to prison time or other harsher consequences for the actor.

Still, Chicago Police went so far as to send Smollett a $130,000 bill representing what they said was the cost of the investigation into his claims.