Theresa May throws the kitchen sink at Brexit 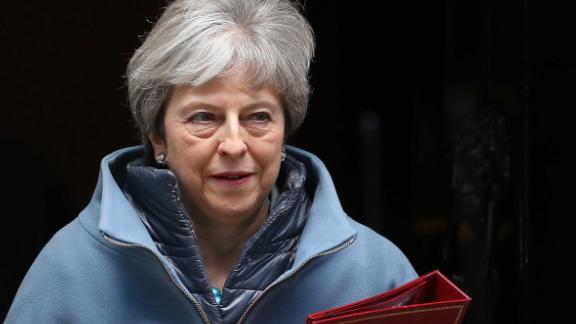 Theresa May has said that she will stand down as prime minister once Brexit has been delivered, according to a Conservative Party lawmaker in a meeting with her.

Wednesday was always going to be historic.

Lawmakers in the House of Commons had seized control of the parliamentary timetable from Theresa May for the day in order to vote on alternatives to her Brexit plan. In the event, Parliament failed to agree on a majority for anything. But this unprecedented loss of authority was a humiliation for May.

At 5 p.m. local time, the Prime Minister regained the initiative. Standing in a packed committee room before her Conservative MPs -- many of whom hate her deal and have run out of patience with her -- she made them an offer: Back my deal, and I'll quit. Brexit will happen, and someone else will lead the negotiations on the UK's future relationship with Europe.

In 242 words, May temporarily made a sideshow of the events elsewhere in the House of Commons.

In offering her resignation, May hopes that enough Conservative rebels will change their mind when she puts the deal back to them -- possibly on Friday. It's a tough ask: She needs 75 MPs to flip.

The immediate signs were positive for May. Boris Johnson, who resigned from May's Cabinet over her handling of Brexit, told hardline Brexiteers that he would, reluctantly, back the deal. Others followed. As Conservative MP Zac Goldsmith told me shortly after the news of Johnson's about-face: "It's this deal or it's years of paralysis, division, chaos and ultimately the slow death of Brexit."

But Johnson's endorsement, along with the promise of May's departure, still might not be enough. The hardline Democratic Unionist Party, the Northern Irish group that props up May's government, delivered what may be a knockout a blow late in the day when, confirming it would still not support the deal.

Britain's hapless Prime Minister might not have enough votes to ensure her own resignation.

May's Brexit nightmare is a mess of her own making. After taking over as Prime Minister in 2016, May went out of her way to prove her Brexit credentials. Having voted Remain in 2016, she began worshipping at the altar of Brexit more enthusiastically than anyone expected.

The problem was that David Cameron, her predecessor, left behind him a small parliamentary majority of 12. It was always obvious that with parliament so divided on Brexit, that slim margin could pose problems.

But, as her popularity rose among the Brexit faithful and with an apparently weak leader of the opposition, May and her advisers saw an opportunity.

So on April 27, 2017, Theresa May announced a snap election. Her speech was so confident and her commitment to Brexit so apparent, this Remain-supporting former Home Secretary was cheered by the Euroskeptic media. The Daily Mail newspaper said that she would "crush the saboteurs" who sought to spoil Brexit. A bit awkward, considering some of those saboteurs were members of her own Party. It did not go down well with this group.

But it was a massive miscalculation. On June 8, the public took May's majority from her. It turns out that, if you lean so hard into one side of a binary argument, half the nation doesn't much like it.

This is where things got messy. Negations with Europe had begun and the noises were not positive. Her loss of authority emboldened pro-Europe Conservatives and unified opposition.

To continue in government, May was forced to strike a deal the Northern Irish Democratic Unionist Party. As the name suggests, the DUP's primary concern is that Northern Ireland remain a part of the United Kingdom and will do almost anything to oppose a united Ireland.

The single most contentious issue in Brexit has been preventing a the return of border posts on the island of Ireland.

The situation is unique. The Republic of Ireland is an EU member state. Norther Ireland is one of the four nations that make up the United Kingdom of Great Britain and Northern Ireland. The simplest way to keep the border open would be for the UK to remain in the EU's Customs Union.

But a key Brexiteer promise was that, after leaving, the UK would be allowed to determine its own trade policy. Membership of the EU Customs Union means that external trade policy is outsourced to Brussels.

Outside the Customs Union, customs checks would have to take place on the border, meaning the return of border infrastructure -- the absence of which had been a key plank of the Good Friday Agreement that ended decades of sectarian strife in Northern Ireland.

Someone had the smart idea, in the event of no solution being found, that Northern Ireland could remain aligned on customs with the EU (essentially in the Customs Union), eliminating the need for a border.

The DUP were having absolutely none of this. This would mean Northern Ireland not only being treated differently to the rest of the UK, but also raised the prospect of a sea border between Northern Ireland and Great Britain, making a united Ireland more likely.

The UK's negotiators pushed back, and eventually got a concession from the EU. What came to be called the Northern Ireland "backstop" would, in large part, apply to the whole of the UK.

But remember that promise of the UK striking its own trade deals around the world?

It wasn't just the DUP that hated the deal. Brexiteers said that the backstop would leave the UK a vassal state, potentially forever subservient to Eurocrats in Brussels.

And as May threw everything she had at placating these two groups, she alienated softer Brexiteers, who ultimately decided that they had no reason to support her.

Those trenches were dug long ago and, truthfully, no one was willing to climb out. Until now.

Over the past week or so, hardliners have become worried that Brexit is being "stolen" by Remainers. The EU offered the UK a Brexit delay that could pave the way to another referendum. And the House of Commons Europhile majority is not giving up, as the indicative votes show. Two of the three most popular outcomes involve a customs union.

How does this play out? May lost "meaningful vote two" by a margin of 149. That means she needs to turn around an eyewatering 75 MPs to win by one.

But this is her best chance: Scare the life out of Brexiteers; let softer Brexiteers know that their voices will be heard in future negotiations, as she has done by allowing a free vote on the alternative Brexit plans, and offer her head for her deal.

Last week, the EU offered Theresa May a final chance to get her deal approved. This week, we are watching her throw the kitchen sink at it.

A final point. Dependent on how you count it, May's majority with the DUP is in single figures. Whoever takes over from her will inherit that unenviable situation. The gravity of that reality should be the main takeaway from the embarrassment of indicative votes.

And with a huge amount of legislation to pass in the wake of Brexit and goodness knows what battles that follow, it's hard to see how the United Kingdom, a nation whose politics have been rocked since 2016, doesn't have an election before the next scheduled one in 2022.