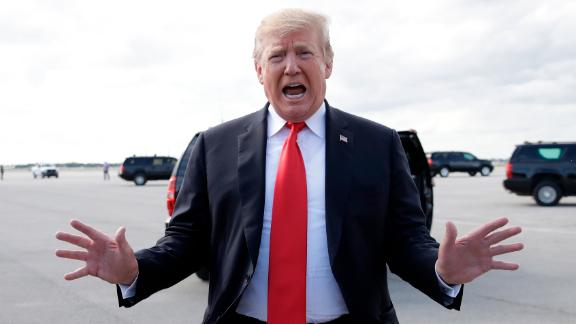 The biggest loser from this weekend's men's NCAA college basketball tournament? Cinderella, since all of the smaller, mid-major schools lost. Here's what else you need to know to Get Up to Speed and Out the Door. (You can also get "5 Things You Need to Know Today" delivered to your inbox daily. Sign up here.)

The Mueller report is in, and Donald Trump starts a brand new phase in his presidency. Special Counsel Robert Mueller didn't find that Trump's 2016 campaign or his associates conspired with Russia, Attorney General William Barr announced in a four-page letter to Congress. Mueller's report essentially punted on the question of whether Trump committed obstruction of justice. Mueller's investigation did not conclude that the President obstructed justice, but it also didn't exonerate him. Barr and Deputy Attorney General Rod Rosenstein made the decision the evidence was "not sufficient" to support prosecuting Trump.

A jubilant Trump went beyond the conclusions of Barr's letter by quickly tweeting that the report was "total EXONERATION." He said the whole investigation was "an illegal takedown that failed" and that he hoped a probe would be started of people on "the other side." Those close to the President said Team Trump will "slam and shame" the media during its victory lap. Trump's Republican allies in Congress felt vindicated as well.

So what happens now? Democrats and others are demanding to see Mueller's full report, especially the evidence on possible obstruction of justice. And calls are already being made to have Barr testify before Congress. Read six takeaways from Mueller's report. And don't forget, this doesn't end the legal wrangling for the President, as a number of investigations against Trump continue.

A village in Mali was hit with a horrible attack over the weekend. At least 134 people, including women and children, were killed when armed men dressed as hunters stormed the village of Ogossagou, the UN said. Many members of the country's Fulani ethnic community live in the area. They are often targeted and accused of having ties to jihadist organizations. Members of the Dogon ethnic group have been accused of past attacks against the Fulani. Mali's government promised to hunt down the attackers and punish them.

The death toll is up to 750 people in southern Africa as the region tries to recover from Cyclone Idai. Most of the dead are in Mozambique, where the storm slammed into the port city of Beira more than a week ago with 109 mph winds. About 90% of Beira was destroyed, aid groups estimate, leaving 110,000 people living in camps. The city is slowly starting to bounce back, with Beira's main road reopening yesterday and small shops starting to sell rations. The situation is more dire in rural Mozambique, with reports of people trapped by flood waters, cholera outbreaks and bodies washing up on flooded roads.

It's happened again. Another Marjory Stoneman Douglas High School student died over the weekend in what police call "an apparent suicide." The student hasn't been ID'd yet. The death comes in the same week that former student Sydney Aiello took her own life. Aiello survived the 2018 massacre at the school, but suffered from PTSD and survivor's guilt, Aiello's mother said. Parents of Marjory Stoneman Douglas students are being urged to address the threat of suicide. If you or someone you know might be at risk of suicide, here's how to get help: In the US, call the National Suicide Prevention Lifeline at 1-800-273-8255.

The cruise from hell. There's no other way to describe what happened over the weekend on the Viking Sky cruise ship. The ship -- with 1,300 passengers and crew -- lost power on Saturday off the coast of Norway and sent out a distress call. Passengers reported being violently tossed about by rough seas and heavy wind. Twenty passengers were injured. Nearly 500 passengers were airlifted from the Viking Sky before the ship regained engine power and sailed to a harbor in western Norway.

Calling it a career

The Patriots' Rob Gronkowski is retiring. All the Seahawks, Falcons and Rams fans whose hearts he helped crush in all those Super Bowl wins are crying tears of joy.

So hard to say goodbye

You've quit your job and don't know what to write to your soon-to-be ex-colleagues. Here's how to write the perfect goodbye note.

More blessed to give than to receive

He's a math and physics teacher from rural Kenya known for giving away 80% of his monthly income. He just won a $1 million prize.

You can own your very own piece of Italian paradise, a private island, if you have about $1.1 million handy.

"My daughter got accepted into USC all on her own. No jail time!!!!"

Rap legend Dr. Dre, celebrating in an Instagram post daughter Truly Young's acceptance into USC and throwing shade at other rich families caught up in the college admissions scandal. But many people were quick to point out the $70 million donation Dre and producer Jimmy lovine made to the school a few years ago. Dre later deleted his post.

UK lawmakers are set to vote today on whether to come up with alternatives to Prime Minister Theresa May's Brexit deal.

Got a case of the Mondays? Well here are five minutes worth of animals reacting to musical instruments to get you in a better mood. (Click to view)

Several bullet holes at the Park at Redstone Apartments in Huntsville