The EU throws Theresa May one last Brexit lifeline 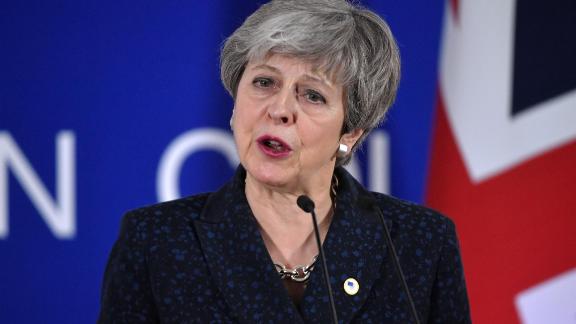 The European Union has agreed to a delay to the tortuous Brexit process that avoids the UK crashing out without a deal and throws one last lifeline to the beleaguered British Prime Minister, Theresa May.

At the end of a dramatic day here in Brussels, Theresa May was thrown what could very well be her last Brexit lifeline.

At 11.20 p.m. local time, Donald Tusk, President of the European Council, finally announced that 27 EU leaders had agreed unanimously on a response to the British Prime Minister's request to delay Brexit and avoid a chaotic split on March 29. And to everyone's surprise, they offered her two options.

First, a short delay, giving the UK until May 22 to get its affairs in order before leaving the EU. But that option is only available if lawmakers in the House of Commons approve May's overall withdrawal deal next week.

Alternatively, option two kicks in if May loses the third "meaningful" vote on her deal. That allows the UK to stay in the EU until April 12, at which point it must make a choice: Take part in the European parliamentary elections in May and seek a longer delay to Brexit, or don't. Should it come to it, the implications of that decision will be the next big Brexit bust-up.

It all seems quite simple. But it's hard to explain how tense things felt in the EU capital on Thursday. As a promised 6 p.m. press conference got pushed back, all that was clear was that nothing was clear at all.

Earlier in the day, European Council President Donald Tusk had put on the table a plan for a short extension to the Brexit process -- until May 22, contingent upon the House of Commons ratifying the withdrawal agreement.

Across Brussels, the mood was gloomy. No one outside Theresa May's inner circle believed that the withdrawal deal's prospects in Westminster were much better than those of a snowflake in Tusk's special corner of hell. In the eyes of many here, that made a no-deal crash-out more likely than ever before.

On the sidelines of the summit, EU officials were openly discussing what would happen when, not if, May's deal failed again. Some were suggesting inviting British lawmakers from across the political divide to Brussels to seek a cross-party path forward. There was even talk of offering a longer delay if the UK held a general election or, potentially worse, a second referendum. No one could possibly know how any of the scenarios would play out.

All these options had one aim: To prevent no deal on March 29, the date sealed two years ago when Britain fatefully set the Article 50 countdown clock ticking.

Thursday night's surprise announcement of a new, two-part timetable will go some way to reducing this concern. If nothing else, it has reiterated the EU member states' commitment to avoiding no deal. For months, they've made it clear that they had no intention of being blamed for such an outcome.

But the EU is committed to something else, just as strongly: Not interfering in the politics of a sovereign nation. Especially not one that is leaving the union.

That's where we come back to the choices that now face the UK. Next week, UK lawmakers could fall into line and back May's deal, which is the EU's preferred option, and everyone can get on with the next stage -- negotiations on the future relationship. (And if you thought the past two years were bad, they were meant to be the easy bit.) The UK might even find some stability -- even if that means getting rid of its battle-scarred Prime Minister.

Or, Members of Parliament could vote the deal down. At this point, the UK would be forced to do some soul searching as it must decide by April 12 whether to take part in the European parliamentary elections, which begin on May 23.

If it decided not to participate in those elections, Britain could simply not remain in the EU. Without approval for a withdrawal deal, May 22 would become the new March 29, a cliff-edge over which the UK would be obliged to hurl itself.

And if you think that's a fantasy, consider these facts: First, when a journalist asked European Commission President Jean Claude Juncker to define a long delay, he replied: "To the very end." Second: The House of Commons is instinctively more Europhile than it is Euroskeptic. Third: We are still nowhere near May's deal being passed. And fourth, on the same day that this news landed, more than 2 million people signed a petition on the government's website for the UK to revoke the Article 50 process altogether.

What all that means is this: Not long after having thrown itself at the mercy of Brussels, Brussels pushed the Brexit ball firmly back into the UK's court.