Something is terribly wrong with Trump 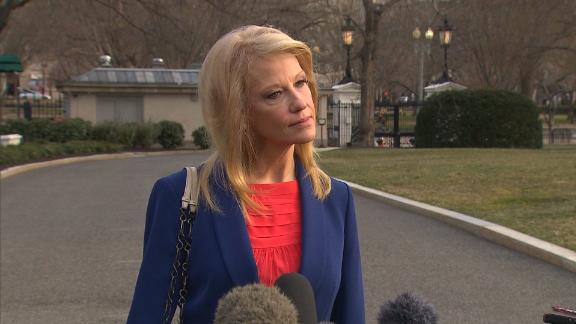 Kellyanne Conway said that she doesn't share her husband's concerns when it comes to President Trump's mental fitness.

Let's pause for a moment and consider that President Donald Trump's chief of staff Mick Mulvaney had to say on national TV that his boss is "not a white supremacist" and one of Trump's senior advisers, Kellyanne Conway, had to push back against her own husband's questioning of Trump's mental state.

Over the weekend, as Trump ranted on Twitter, George Conway, who is a prominent conservative lawyer, posted the psychiatric definition of narcissistic personality disorder and asked all Americans to think about Trump's "mental condition and psychological state."

Naturally, the press wanted to hear Kellyanne Conway's view. "No, I don't share those concerns," she said as she went to work at the White House on Monday. She added that she had been busy with her children and may not have been aware of all the President's recent tweets.

The twin spectacles, headlined by Mulvaney and Conway, come after several off-key days for a president whose behavior is so troll-like that Americans have come to expect him to act more like an out-of-control Reddit commenter than a chief executive of the United States. Altogether, these events reinforce the idea that Trump is wholly unsuited for the Oval Office.

Part of the reason that Mulvaney and Conway had to defend the President is because rather than focusing on Friday's tragedy, when a white supremacist allegedly killed 50 people in two New Zealand mosques, Trump spent the weekend tweeting his grievances about John McCain, Fox News' suspension of Jeanine Pirro and GM's CEO Mary Barra.

And when asked directly about the deadly New Zealand attack on Friday, Trump denied that surging white nationalism was a serious problem. Though Trump did offer condolences and called the attack a "horrible, horrible thing," he failed to note the attacker specifically targeted Muslims. (Press secretary Sarah Sanders also omitted the religious identity of the victims.)

The contrast with the President's response to an attack last year on Coptic Christians in Egypt is glaring. Back then he declared that the "bloodletting of Christians has to end."

In failing to specifically condemn anti-Muslim terrorism in New Zealand, Trump demonstrated once again that he's not up to the job. White nationalist sentiment -- and the fevered online forums that inform it -- is a problem around the world and in the United States. In fact, according to the Anti-Defamation League's Center on Extremism, between 2008-2017, the majority of killings caused by extremists have been committed by those with white-nationalist and far-right ideologies.

And perhaps part of why Trump cannot easily condemn white nationalism is because he has been blowing white nationalist dog whistles for several years now. During the 2016 campaign, he whipped up anti-immigrant sentiments by insisting they are responsible for illegal drugs, rape and violent crime (In fact, immigrants are more law-abiding than individuals born in this country.) After he was elected, Trump characterized immigrants as invaders, a common turn of phrase among white nationalists.

Trump's words and actions have drawn the admiration of white nationalists, including the New Zealand mosque attacker, who purportedly mentioned the President by name in his manifesto. But the alleged attacker isn't the only white nationalist to praise Trump. After Trump's election, white nationalists led a rally through Charlottesville. After an innocent woman was killed by one of them, Trump noted there were "very fine people" among them. And David Duke, a former Klansman at the rally, explained that white nationalists like him voted for Trump, because he said he's going "to take our country back."

With praise from Duke and the torch-bearers in Virginia, the President has a serious problem that calls for him to do something more than deny that white nationalism is a growing problem. A true leader would not only disavow the extremists, he would embrace all whom they target and rally the world against them. The highest office in the land -- and the most powerful position in the world -- requires nothing less.

In the context of Trump's own record, the pushback from Mulvaney and Conway is therefore not persuasive. White House officials can offer all the denials they want, but the fact that the questions are asked -- again and again -- is a sign that something is terribly wrong with the most powerful person on Earth.

Police officer injured while responding to call in South Huntsville

Brooks High School teacher out on $50,000 bond after indictment on sex with student charges

WAAY 31 News Anchor Marie Waxel is having a baby!