Parkland student: When a book drops or a siren wails, we remember that day 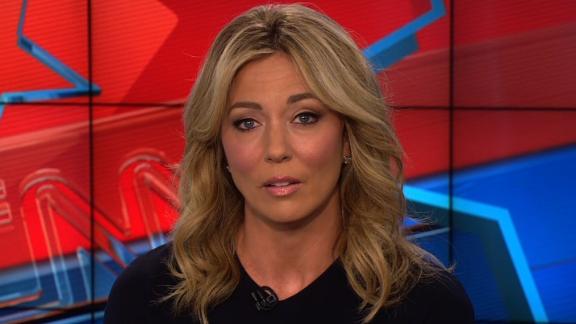 CNN's Brooke Baldwin was visibly emotional reading a letter written by Lori Aldaheff to her daughter Alyssa, a year after Alyssa was killed in the Parkland school shooting.

February 14, 2018, started off as a normal day. My mom dropped me off at school. I was stressed about a Spanish test. But I was excited to receive carnations from my friends as part of a Valentine's Day fundraiser.

During second period, a fire alarm went off. We didn't give it much thought until another alarm sounded two periods later. We all looked at each other, confused, not sure if we should leave class. We lined up on the grass and that's when I heard it -- five loud pops that sounded like gunshots. I didn't want to believe my school was under attack.

I remember being told to run and not stop. As text messages from my friends and family flooded my phone, I learned students and teachers were dying in their classrooms. It was all so surreal. That Valentine's Day changed not just my life or the lives of those in my community, but it also changed this country forever.

Of course I never imagined 17 people in my high school would be shot and killed and 17 others wounded. Even though a year has passed and some people may have forgotten about the shooting, there is not a day that passes when I do not think about the chaos that unfolded and the lives that were taken. Now when a book drops on the floor in class, my classmates and I all have to take a breath and remember it is not a gunshot. When we hear sirens passing by, we all have to remind ourselves that they are not driving to our school, and when we see empty desks, we have to remember that this is our new normal.

As a community, we have channeled these feelings of grief, fear and anger into action. Since the day after the shooting, we knew that we could not wait for our elected leaders to act. We had to stand up for what was right to ensure that our friends did not die in vain. And to make sure that no other person has to face the pure horror we experienced on Valentine's Day 2018.

The week after the shooting, I went to Tallahassee to lobby Florida's legislators to demand better gun laws. One state legislator told me that we were "naive to think that a gun reform bill would ever pass in Florida." Not even a month later, our Legislature passed the state's first piece of proactive gun safety legislation in decades.

And, for the first time in years, Congress held a recent hearing on gun violence prevention policies, including H.R. 8, a bill to require background checks on all gun sales. This is an essential piece of legislation because right now, background checks are only required under federal law for sales conducted by licensed dealers. That leaves out plenty of unlicensed sales at gun shows and online. In fact, nearly 1 in 9 people looking online to buy guns from unlicensed sellers wouldn't pass a background check, according to a new report from Everytown for Gun Safety. This legislation can fix this dangerous loophole.

Months before the shooting, my debate team at Marjory Stoneman Douglas High was tasked with debating gun laws. On the team, we were all required to make both sides of the argument. But in this case, it was nearly impossible to make a reasonable argument against stronger laws -- the evidence was too overwhelming that good gun laws work. As I rattled off statistics, I never expected that months later, my friends would be part of those horrifying numbers -- part of the 100 Americans killed every day by gun violence, according to Everytown. Now, the statistics are more than just numbers for me. And when I talk to lawmakers about gun violence, I know personally what's at stake.

The fact is that gun violence can affect every family -- no loved one or community is protected from it until we all are.

I can't stop reliving what happened in my community last February 14, but I can be part of the solution to stop others from living it in the first place. There's so much more we must do to stop this crisis, and it can start with passing background checks on all gun sales.