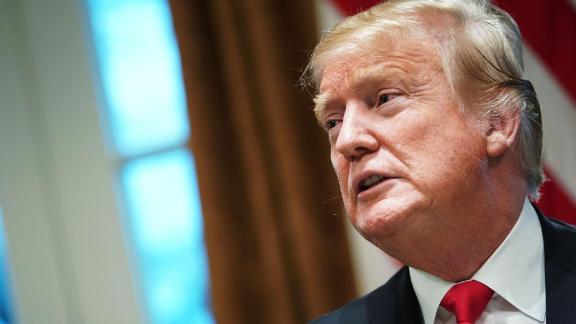 Even as lawmakers discuss a short-term measure to fund the government, President Donald Trump again raised the prospect of other ways to fund a border wall without congressional approval.

Think your neighborhood is pricey? Somebody just paid $238 million for an apartment on New York's Central Park. That's the highest price ever paid for a US home. Here's what else you need to know to Get Up to Speed and Out the Door. (You can also get "5 Things You Need to Know Today" delivered to your inbox daily. Sign up here.)

Welcome to Day 35 of the partial government shutdown. It's also the day the 800,000 federal employees affected by it get a second paycheck that reads $0.00. (Hey, Wilbur Ross, that's why furloughed workers are going to food banks.) Are the nation's leaders any closer to ending it? Maybe. There's talk the Trump administration might get behind a three-week stopgap funding bill to reopen the government while the White House and Congress hash out their differences on border security. But as part of the deal, President Trump would want to include "a large down payment" on the border wall (though no one knows what that really means). And House Speaker Nancy Pelosi flat out rejected the down payment idea.

Meantime, CNN has learned the White House is separately prepping a draft of a national emergency proclamation for the southern border and has found more than $7 billion to fund the border wall. Remember, Trump could declare a national emergency and direct the Defense Department to build a wall without needing Congress' blessing.

He was crying for his mom. That's how searchers found 3-year-old Casey Hathaway, the North Carolina boy who disappeared from his great-grandmother's backyard three days ago. Search teams had been combing about 1,000 acres of heavily wooded areas, through freezing cold, heavy rains and high winds. On a tip, they ended up in a spot where they heard Casey calling out for his mother. Following his cries for about 50 yards, searchers found him tangled up in vines and thorns. He's at a hospital being treated for cuts and scrapes and has been reunited with his family. The sheriff says there is no sign of abduction in this case. "He's good, he's up and talking," Casey's mother told reporters. "He's already asked to watch Netflix, so he's good."

The crisis in Venezuela kicked up a notch as President Nicolas Maduro announced he's closing the country's embassy and consulates in the US. He had already this week kicked US diplomats out of Venezuela. Maduro is angry with the Trump administration for recognizing Venezuelan opposition leader Juan Guaido as president. In a speech, Maduro accused President Trump of trying to orchestrate a coup against his country, which is reeling from an economic collapse that's caused food and medicine shortages. An estimated 3 million Venezuelans have left since 2014. Here's more on how Venezuela tumbled into chaos and how the turmoil may affect oil prices.

It sounds like something out of a nightmare. A man walks into a bank and shoots everyone he finds. Police say that's what 21-year-old Zephen Xaver did at a SunTrust bank in Sebring, Florida, in a shooting that killed five people. Xaver, who police say surrendered, was charged with five counts of capital murder. A SWAT team that entered the bank after the shooting found five women on the floor, all shot in their heads and backs. One employee, who was in a back break room when the shooting started, was the only person to escape. The suspect had no plans to rob the bank and no known connection to the victims, police said. The city's police chief called it a "senseless crime."

Ready to hop on a cruise ship and relax? Just don't breathe too deeply. The air on the ship could be as bad as the polluted skies of Beijing, a new report says. The study looked at air pollution levels generated over two years aboard ships run by Carnival and its subsidiaries, Princess Cruises and Holland American. Its author determined the exhaust was so dirty and toxic it was "comparable to ... polluted cities, including Beijing and Santiago." The report says pollution is worst behind the smokestack, usually located at the back of the ship. That's notable because it's where running tracks, swimming pools or lounge areas are usually located, so passengers and crew spend a lot of time there. Carnival said tests of the air quality on its ships "meet or exceed every requirement."

Out of this world?

Guess where Earth's oldest rock was found. The Arctic? An African mountainside? Ancient Mesopotamia? Would you believe: the moon?

Will "Suits" get a royal visit when the series' ninth and final season airs? The show's creator says it's too early to know if Meghan Markle will be back.

Don't I know you?

Meet the Afghanistan vet and Colin Powell fan who stopped on the side of the road to help change a tire for a stranger -- who turned out to be Colin Powell.

The Golden State Warriors, the reigning NBA champs, aren't exactly on speaking terms with President Trump. So, they visited former President Obama instead.

What Italy owes Amanda Knox, the American former student who spent years under the cloud of a murder she didn't commit. The European Court of Human Rights granted the award for the nation's failure to provide Knox with a lawyer and an appropriate interpreter when she was first detained.

Who has the time to go through hundreds of movies to stitch together this supercut cover of M.I.A.'s "Paper Planes?" An editor in the Netherlands, apparently. (Click to view.)