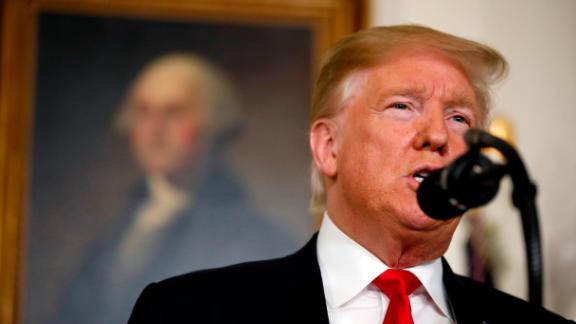 President Trump offers extended temporary protections for DACA recipients and individuals with Temporary Protection status in exchange for $5.7 billion in funding for a wall along the US-Mexico border.

Year Two of Donald Trump's presidency ended Sunday, and a happy anniversary it was not.

The government was still partly shuttered, his poll numbers were sinking and investigators were circling his campaign and business empire. Newly empowered House Democrats were getting ready to grill Michael Cohen, his former lawyer and fixer, at a committee hearing in a few short weeks. And after nearly a month of bruising political deadlock, the human cost of the shutdown kept growing and growing.

On Wednesday, House Speaker Nancy Pelosi suggested putting off Trump's State of the Union address, a judo move that was "a good place to begin clawing back Congress' power," wrote Joshua Spivak (and also an introduction -- for Trump, and Pelosi's caucus -- "to the big leagues," observed Jen Psaki.)

On Thursday, the President parried by blocking a secret trip to Afghanistan by Pelosi and other Congress members. It was a "peevish retort to a political provocation," David Axelrod wrote, adding that Trump's letter to Pelosi revealed much about how he views the world. "Septuagenarian politicians are squabbling like 7-year-olds," Mark Landler remarked in The New York Times.

The President had the Clemson Tigers over for Big Macs at the White House ("massive amounts of Fast Food (I paid) ... Great guys and big eaters") and as the midpoint of his term approached, he remained there, grousing on Twitter.

Meanwhile, at week's end, 800,000 federal employees were still without paychecks in the longest government shutdown ever.

"Everything about this is ridiculous," wrote Andrew Robinson, a military veteran furloughed from his job with the USDA in Kansas City, Missouri, where he lives with his wife and two children. "Here I sit. I have a good job, with an income we cannot live without, but I'm job searching. I thought that getting a job with the government would provide my family with security." His family covered last month's mortgage, "but this month, I am $300 short. I emptied our emergency fund to buy tires for my vehicle and cover what I can for this upcoming mortgage. So, that resource is depleted." His message for lawmakers: "Please, please, please put your differences aside. Your people are struggling."

Katie Venable thought that that "as an unassuming everyday American who doesn't work for the government," she would avoid the effects of the shutdown. But the USDA loan she was planning to use to realize her "American dream of home ownership" is now on hold, and her closing day, January 18, has come and gone. "My chance of finally owning a home, this particular home especially, continues to dwindle every day this shutdown continues."

Amanda Beam, a columnist from southern Indiana, wrote that her husband, an FBI agent who loves his job and puts his life on the line, has been working without pay. "He soldiers on ... I'm not as understanding," she said. She emailed her congressional representatives about the stress and frustration. "A letter to Santa would probably have delivered better results," she observed. "Enough is enough. Not resolving this shutdown through courage and compromise is a dereliction of Congress's sworn duty."

On Thursday night, the country began to buzz over a Buzzfeed report that Trump had told his lawyer to lie to Congress -- an impeachable offense, if true. (A rare statement from special counsel Robert Mueller's office late Friday called the story "not accurate," though Buzzfeed stood by it.)

But the "I" word, impeachment, was already in play. Julian Zelizer observed: "The standard argument that an impeachment proceeding would 'distract' the President from the serious business of governing isn't really relevant right now, because the federal government is not up and running." He added: "President Trump has proven repeatedly that he already is not handling the basic components of the job."

On Tuesday, Trump's nominee for attorney general, William Barr, went before a Senate committee for his confirmation hearings. As AG, Barr would be in a position to decide whether Mueller's report would become public. Walter Shaub, former director of the Office of Government Ethics, called Barr's nomination the latest step in Trump's "slow-motion" version of the Saturday Night Massacre, recalling Richard Nixon's purging of the attorney general, deputy attorney general and special counsel during Watergate. The Senate can't let Trump get away with it, he said, and must insist that Barr promise to recuse himself from oversight of the Mueller probe.

Vice President Mike Pence's wife, Karen, will take a job teaching art at a Christian school in Virginia that bans LGBTQ children and requires employees to sign a pledge not to have sex outside of marriage -- heterosexual marriage, that is. Disqualifying "moral misconduct" would include "homosexual or lesbian sexual activity, polygamy, transgender identity, any other violation of the unique roles of male and female." Clay Cane was appalled: "This language is disgusting," he wrote, and high-order hypocrisy: Mike Pence, he said, "stands shoulder to shoulder with his boss, Donald Trump" and shows "unwavering support for a man who has been married three times, divorced twice, has had five children with three women and who has been accused of (though denies) paying a porn star and a Playboy model hundreds of thousands of dollars to conceal affairs he'd had with them." The Pences should deliver that pledge of moral purity for Trump to sign, Cane wrote.

The media is treating a "benign announcement as if it's criminal," asserted Nicole Russell in the Washington Examiner, and shows a "lack of understanding of Judeo-Christian values, or knowledge that there's nothing inherently (or legally) wrong with schools embracing certain core values and shunning others."

Whether you agree with Karen Pence or not, her return to the workplace is a victory for feminism, wrote Alyssa Rosenberg in The Washington Post. "In a small way, her choice paves the way for first and second spouses of the future to take bolder steps toward preserving their professional independence."

A nightmare for Trump

He's young, accomplished and Trump's nightmare: a Latino who wants his job, wrote Raul Reyes. Julián Castro, a Stanford and Harvard Law grad who was Barack Obama's HUD secretary, announced his candidacy for president last week in San Antonio, where he once was mayor. He's "a living repudiation of the negative rhetoric that President Trump often puts forth about Latinos, who represent a surging demographic that made up about 13% of the electorate in the midterms," Reyes said. Latinos lean Democratic, and with the California and Texas primaries moved up on the calendar, could gain an early advantage for 2020.

Primaries are indeed where most Americans can have their voices heard, argued Alexandra Rojas -- whose grassroots organization recruited Alexandria Ocasio-Cortez to run for Congress -- and progressive organizer Sean McElwee. Democratic lawmakers who have become complacent or broken faith with their party by voting with Republicans -- like Texas Democratic Rep. Henry Cuellar, they say -- deserve to be primaried. Primaries, they wrote, inject "new policy ideas into the party." They introduce "exciting new figures" who "can engage millennials, women and people of color who don't see enough people representing them in Congress."

America's hubris in Iraq: the history

On Thursday, the US Army War College published a monumental and authoritative history of the Iraq War. Peter Bergen called it a devastating portrait of blunders -- by Defense Secretary Donald Rumsfeld and other American officials -- that cited "an emboldened and expansionist Iran" as the only apparent victor. "Wishful thinking and ignorance were the key drivers of the early decision-making about the conflict," Bergen wrote. Nearly 4,500 American military personnel died, another 32,000 were wounded, with somewhere between 200,000 and more than a million Iraqis killed. The cost to the US: $800 billion to nearly $2 trillion.

"As I have learned in my career, there is no correlation between an individual's scientific achievement and his or her ethical behavior," observed geneticist Joseph Graves.

He was reacting to the news that Nobel laureate James Watson, co-discoverer with Francis Crick of DNA's double helix structure, was stripped of his honorary titles last week by the Cold Spring Harbor Laboratory. A longtime blurter of racist, homophobic and sexist ideas, Watson was exposed in a recent PBS documentary as an unrepentant bigot. If anyone should know by now about the bogus nature of racial theories of intelligence, it should be Mr. DNA, wrote Graves. "The tragedy here is Watson's intransigence in light of the scientific developments of the late 20th and early 21st century," he wrote, which have "demolished both the notion that human beings could be unambiguously partitioned into biological races, and the idea that it is likely that 'races' of humans are genetically differentiated in intelligence."

Gillette to men: Don't be jerks

Gillette put out an ad taking on toxic masculinity, harassment and bullying, to the delight and amazement of many ("Thank you @Gillette for this reminder of the beauty of men," tweeted Jessica Chastain). But it also left some men feeling burned. Like Piers Morgan, who called it an assault on manhood. How sadly predictable that asking men to do better should draw a backlash, observed Jill Filipovic. And while it is of course true that Gillette made the ad to make money, "that doesn't mean the ad is bad," she said. "It is an indication of feminist progress."

The advertisement comes a couple weeks after The American Psychological Association issued its first-ever guidelines for the treatment of men and boys. Its verdict: "traditional masculinity is psychologically harmful and ... socializing boys to suppress their emotions causes damage." The ensuing outrage from conservatives is out of line and assumes "that traditional masculinity and men are one and the same," argued Noah Berlatsky. "Superman and James Bond are fictions. Real human men are more vulnerable and more various. Conservatives want to put all men in a single, small box. The APA guidelines suggest we let them out -- for the good of men, of women, and of people of every gender."

Sign up to get this weekly column as a newsletter.