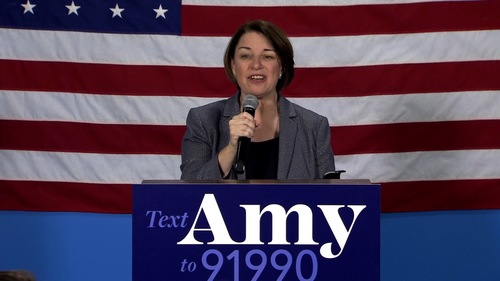 In a sign of Amy Klobuchar's determination to stop...

In a sign of Amy Klobuchar's determination to stop Bernie Sanders from becoming the Democratic presidential nominee, her campaign argued in a memo released Monday that the Minnesota senator is the moderate best positioned to beat him.

"Just as Amy has shown on the debate stage, she is the best person to take on Bernie Sanders and the best candidate to beat Donald Trump," campaign manager Justin Buoen wrote in the memo. "Both â€‹onâ€‹ and â€‹offâ€‹ the debate stage, Amy has highlighted the consequences of having Bernie Sanders lead the top of the ticket, including his divisive politics and health care plan that would kick 149 million Americans off their insurance."

The memo points to raw vote totals, where Klobuchar is in third behind Sanders and former South Bend, Indiana, Mayor Pete Buttigieg. It also cites that Klobuchar currently has 7 delegates, one behind Massachusetts Sen. Elizabeth Warren.

A senior Klobuchar campaign adviser said the memo was not a direct response to calls for Klobuchar to drop out of the race.

"We're in it to play," the adviser said.

"Why would I get out? That's not even a close call for me," Klobuchar said, noting her campaign is powering ahead to Super Tuesday.

The memo comes on the heels of a retooled stump speech for Klobuchar that now begins by criticizing Sanders. It's a notable shift from her previous stump speech, which focused more heavily on Trump.

"I think we know we have a choice to make as a party. And I will say Bernie and I came into the Senate together," Klobuchar told her crowd in Fargo, North Dakota, Sunday. Klobuchar framed her argument against Sanders squarely around switching to "Medicare For All" versus strengthening the Affordable Care Act, saying she admired Sanders and his work, but positioned herself as the best candidate to win help win the House and Senate.

At another campaign stop in Little Rock, Klobuchar told the crowd, "We cannot out-divide the divider in chief."

A Klobuchar campaign senior adviser told CNN that while the campaign would not preview their strategy for Tuesday's debate, Klobuchar has previously pointed out her differences with Sanders. The adviser specifically mentioned the New Hampshire debate, when Klobuchar was the lone candidate to raise her hand when the moderator asked if any of them would be concerned "by having a Democratic socialist lead the ticket."