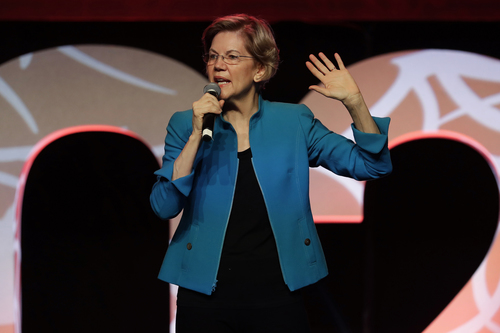 Sen. Elizabeth Warren indicated on Thursday that she would not disavow the h...

Sen. Elizabeth Warren indicated on Thursday that she would not disavow the help from a super PAC supporting her candidacy, a notable shift from a candidate who has spent most of the 2020 campaign railing against the influence of outside groups and criticizing her Democratic rivals for relying on super PACs.

"So look, the first day I got into this race over a year ago, I said I hope every presidential candidate comes in will agree, no super PACs for any of us," Warren told reporters on Thursday. "I renewed that call dozens of times and I couldn't get a single Democrat to go along with it."

Visit CNN's Election Center for full coverage of the 2020 race

"Finally, we reached the point a few weeks ago, where all of the men who were still in this race and on the debate stage, all had either super PACs or they were multi billionaires, and could just, you know, rummage around in their sock drawers and find enough money to be able to fund a campaign. And the only people who didn't have them were the two women. And at that point, there are some women saying, you know, that's just not right," she added.

She was referring to a group of progressive women who formed Persist PAC and will spend over $1 million to air a biography-focused television ad that links Warren to former President Barack Obama and claims Warren can "take on" President Donald Trump and "win."

Warren continued, "So here's where I stand: If all the candidates want to get rid of super PACs, count me in, I'll lead the charge. But that's how it has to be. It can't be the case that a bunch of people keep them and only one or two don't."

The shift comes at a time Warren needs help raising her status and money in the presidential field after a disappointing fourth-place finish in New Hampshire that netted her no national delegates in her neighboring state. The Massachusetts senator is fighting to pick up momentum in Nevada ahead of the state's caucuses on Saturday.

On the debate stage two weeks ago, Warren said "everyone on this stage except Amy (Klobuchar) and me is either a billionaire or is receiving help from PACs that can do unlimited spending," adding: "so, if you really want to live where you say, then put your money where your mouth is and say no to the PACs."

And Warren's campaign website has a page denouncing the help from super PACs.

Klobuchar, too, is now receiving super PAC help from a group named Kitchen Table Conversations, a super PAC that has begun airing an ad titled "sacred" about Klobuchar's fight to allow mothers to stay in hospitals for longer than 24 hours.

Klobuchar's campaign said in October that they didn't want help from a super PAC. An aide said Wednesday that they stand by that position.